Jerusalem is situated on a plateau in the Judean Mountains, overlooking the coastal plain to the west and the Judean Desert in the east. A visit to the Old City followed by the Dead Sea tour illustrates the natural bond formed by the proximity of the two.

08:00-Pick up from the hotel/ship, drive to Jerusalem.

We begin our tour with a breathtaking panoramic view of Jerusalem from the Promenade overlooking the city from the south. We continue through East Jerusalem, driving around the Old City Walls passing Jaffa Gate, the New Gate and Nablus Gate, following the old 1967 Border line, ascend to Mount Scopus overlooking the city from the north. Enjoy the view of the city and the Wilderness of Judea. Proceed to the nearby Mount of Olives which borders the Old City of Jerusalem from the east, passing the Hebrew University and the Augusta Victoria Lutheran Center, enjoy a magnificent view of the Old City with the Temple Mount, the Dome of the Rock and the El Aksa Mosque. Travel along the Ophel Road, view the Garden of Gethsemane and the Church of All Nations, the Kidron Valley with its ancient tombs, the South Wall Excavations and the City of David. Stop at Mount Zion, view of the Dormition Abbey, visit the Room of the Last Supper and the traditional Tomb of King David.

Enter the Old City for a walking tour of the Jewish quarter, see the recent archaeological excavations, the Cardo, the Broad Wall and visit the Western Wall.
Continue walking to the Christian quarter passing through the bustling Arab market, walk along the Via Dolorosa, see the Stations of the Cross and visit the Church of the Holy Sepulcher.

Leave Jerusalem, drive east through the Wilderness of Judea, view of the Inn of the Good Samaritan, Nabi Musa mosque, the City of Jericho, Mount of Temptation and Qumeran-site of the Dead Sea scrolls, arrive at the Dead Sea the lowest point on earth-400 meters below sea level, stop at Kalia beach for a swim, enjoy floating on the therapeutic water and the local black mud bath. 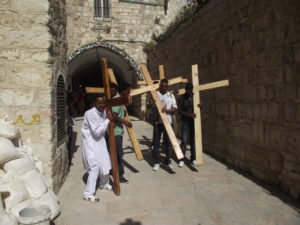